Summary of the round table "Del primer STM a Catalunya als microscopis actuals", which took place on 16th November in the framework of the Setmana de la Ciència, organized by IMB-CNM, ICMAB, ICN2 and the UAB School of Sciences. 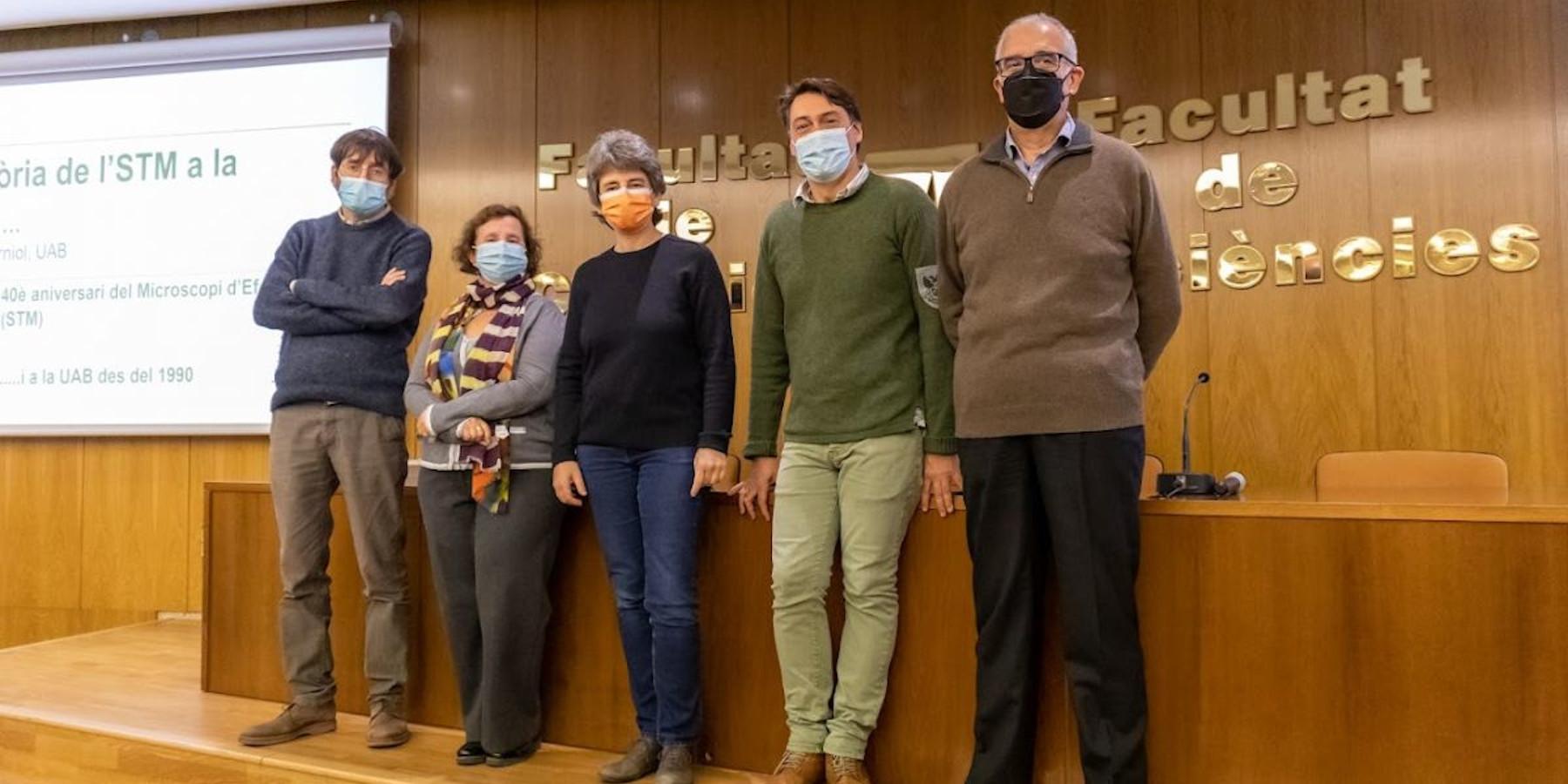 This news is a compilation written by Anna May, at ICMAB, to highlight the relevance of the STM in its 40th anniversary and to summarize the event "Del primer STM a Catalunya als microscopis actuals", which took place on 16th November in the framework of the Setmana de la Ciència and it was organized by IMB-CNM, ICMAB, ICN2 and the UAB School of Sciences. Originally published at ICMAB.

An event to celebrate the 40 years of the invention of the Scanning Tunneling Microscope (STM) and the 35 years of the Atomic Force Microscopy (AFM) took place at the Campus of the Universitat Autonoma de Barcelona (UAB) on November 16, 2021, by some of the pioneers in the field.

After the institutional welcome of Prof. Gemma Garcia, Dean of the UAB Science Faculty, Prof. Núria Barniol (UAB) presented the history of how the first STM in Catalonia was installed at the Science Faculty of the UAB in 1990, along with further related microscopes set up during the 1990’s, like the electrochemical STM, Photon-STM, and Scanning near field Optical microscope (SNOM). Barniol was the first PhD researcher in Catalonia to use the STM in her thesis, which she brought to the event.

"It was good to remember the beginning of the STM at the Autonomous University of Barcelona 31 years ago, when I started my doctorate, the initial stage of my research career and which undoubtedly marked my professional career. Remembering anecdotes about the instrument, the solutions implemented for its operation, some unexpected results (but with projection), the new microscopes developed later and the students who developed them, as well as remembering and recognizing the pioneers in these microscopy techniques was very gratifying," says Núria Barniol.

Prof. Francesc Pérez-Murano (IMB-CNM) presented STM-related methods for nanotechnology, including the manipulation of single atoms, and the celebration of the first Spanish STM conference in 1998. Pérez-Murano also conducted his PhD thesis in the same Department as Núria Barniol, during the 1990's.

"The Scanning Tunneling Microscope had a great influence on the early development of nanotechnology in the 80s and 90s, since it allowed scientists to see and manipulate matter at the nanometer scale and even with single atom resolution and control" - says Francesc Pérez-Murano.

Next, Dr. Jordi Fraxedas (ICN2) revised the influence of Prof. Fausto Sanz in the origins of STM techniques in Catalonia. Sanz was the responsible of the Scientific and Technical Services at the University of Barcelona, at that time. Prof. Fausto Sanz passed away on 13 April 2020, and this event was a small hommage to him.

"Such academic commemorations brings us the opportunity to look back in time and acknowledge those people who pioneered the activity. Fausto belongs to such selected party and was a generous mentor of many young researchers, including myself, and his only interest was to help us in our scientific careers." - says Jordi Fraxedas.

A live session from ICN2 STM laboratory showed the operation of an ultra-high vacuum STM, with Prof. Aitor Mugarza and PhD researcher María Tenorio, who are working with nanoporous graphene synthesized using STM, among others.

The last talk was by Dr. Albert Verdaguer (ICMAB), who described the present and future capabilities of Atomic Force Microscope (AFM). Verdaguer's research has been linked to AFM since he first started working at the Scientific and Technical Services at the University of Barcelona, with Prof. Fausto Sanz.

Documentary about the first STM in Spain

The same day, 16 November 20201, at 6 pm, the documentary "40 años viendo átomos" was released by the Institute of Micro and Nanoelectronics and the Institute of Materials Science of Madrid (CSIC), in honour of the pioneers of these techniques, Juan José Sáenz and José María Gómez Rodríguez, who passed away in 2020. In the documentary, the invention is described, as well as the STM school created in Madrid by these scientists.